Homily for Friday of the Fifth Week of Easter

Have you ever tried to maintain a friendship, but it just wasn’t working?

The person always had something else going on… maybe they had something better to do than spend time with you? Or maybe they were unreliable — They forgot promises, ignored responsibilities, never returned phone calls or text messages. Trying to keep up friendships like this is exhausting work, and eventually… somebody gives up. It’s just… not worth the effort. In fact, it feels more like slavery and not the life-giving reciprocity of a truly enjoyable friendship!

In our Gospel passage this morning, Jesus tells his disciples: “I no longer call you slaves… I have called you friends.”

This is huge. To be friends with Christ — the Word made flesh — is to be at peace with the Living God. It’s to have access to the Father’s merciful heart. It’s to be filled with the boldness and conviction of the Holy Spirit! What an offer of friendship!

And yet, if I’m honest, I know I’m not a very good friend to Jesus. I usually ignore Him or try to shove him out of the way. I frequently forget His blessings. I do most of the talking when we spend time together in prayer — I’m not very interested in listening to His gentle insistence that I grow in virtue and that my sins be put to death for good. Whenever it’s inconvenient to be Jesus’ friend, I act a lot like St Peter when asked if he was one of Jesus’ disciples — one of his friends: “I don’t know the man.”

Perhaps some of this is true for you too? When it comes down to it, maybe we’re flakey, fair-weather friends of Jesus.

But Jesus never gives up on this friendship he has established with us! He never abandons us when we fail — when we prove ourselves to be fickle, selfish, inconsiderate friends.

No, he patiently speaks to us those beautiful words again and again: “I have called you friends! And this friendship is worth all my effort. It’s worth all my Blood. All my grace! Learn from Me. I laid down my life for my friends. I died on the Cross for you! What greater love is there than this? Become more and more my friend — depend more and more on Me for everything.”

“A slave does not know what his master is doing. I have called you friends, because I have told you everything I have heard from my Father,” Jesus says.

In other words: “I’ve revealed the Father to you.” You were once His enemies, hiding from Him in a Garden, but through the waters of baptism, you were made a New Creation! A long-lost friendship has been rekindled!

Alright, so we’ve been made friends of God. What do we do about that? Jesus makes that clear enough:

“It was I who chose you and appointed you to go and bear fruit that will remain.”

What this means is that we are not meant to keep our friend Jesus to ourselves! We have been appointed to draw others into this transformational relationship that He has made possible!

When so many flakey, fair-weather friends disappoint us — why wouldn’t we want to introduce everyone we meet to the Lord… our best, and most loyal friend? Sharing the Gospel isn’t about delivering a set of facts or moral rules. Evangelization is about leading others into a relationship with the Risen Lord who laid down his life on the Cross out of love for his friends.

That’s the fruit we’ve been appointed to bear — Fruit that will last. 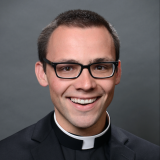